IGGPPCamp is closed for another year but there’s one lingering detail, a final thread to be cut. One last creaking door groaning to a close, if you will.

We want to thank everyone who submitted a spooky tale! They were thrilling to read, chock full of specters and creativity, and we loved them all. Three of these stories have been chosen as the recipients of special Camp Ghost Story badges. Take a moment to relish in the chilling concoctions of your fellow Campers! (Find one story in each post– links to the other two stories at the end!) 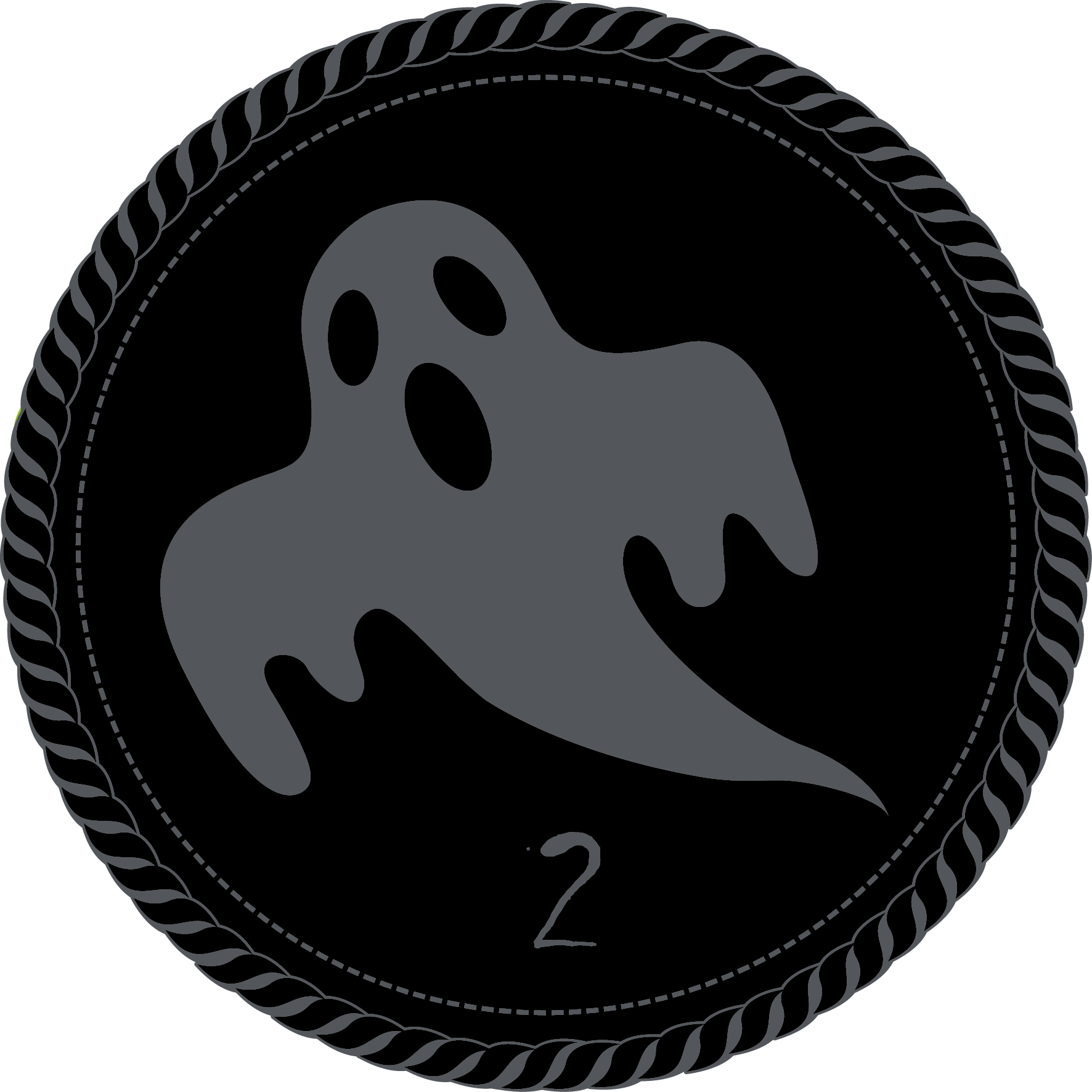 Haley bolted up in her bed, gasping for breath and breathing in the cold morning air. She blinked her eyes against the sunlight streaming in through the cabin window. Haley sighed and lay back down in her camp bed. Another nightmare. She had been having them every night since the start of camp three days ago. It was a dark and stormy night the evening of the opening campfire. Haley assumed that the strange weather may have been the cause of the first nightmare but the next two nights had been the same.

Hayley closed her eyes and tried to remember the details of her dream. She remembered walking through a dark pine forest as if she was being drawn in by some strange magic. A luna moth would appear and guide her, weaving in and out of the tall trees. A feeling of curiosity and dread would begin to build in her gut, until she would stop and look down at her feet.

Noticing the circle of mushrooms she had stepped into, she suddenly felt the ground drop from underneath her. Falling into darkness, she would start screaming and her own scream would wake her from her sleep. Hayley rubbed her eyes and took a deep breath before opening them again.

“Weird dream,” she mumbled to herself. She turned her head and traced a carving on the cabin wall with her finger that said TROOP LUX RULES. Must have been some camper from a past year. Hayley wondered if they had nightmares as well. Suddenly, the cabin door flew open with a loud BANG and the next thing Hayley saw was a burst of color.

“THE GLITTERATI STRIKE AGAIN” screamed a camper from a rival cabin who was gone just as quickly as they arrived. Hayley sighed. Glitter bombs seemed to be a popular prank at camp this year. Hayley would have preferred some simple water balloons; those were much easier to clean.

As Hayley’s troop mates groaned and complained about the mess, Hayley began preparing for the day. She brushed her teeth, put on some SPF 50 sunscreen (sunburns were no joke at camp) and tied a bandana around her forehead. She then walked out the door, carefully avoiding the loose plank on the creaky staircase, and started walking towards the arts and crafts cabin.

It was too early for breakfast at the mess hall and Hayley wasn’t ready to spend time with the other campers just yet. The nightmare had left her with a strange feeling she couldn’t shake. The crafts cabin was nicely secluded from other cabins at the camp; it was by the lake and surrounded by trees. Perfect spot to sit and think. Hayley walked up to the cabin and sat on the steps of the porch.

It was an old dilapidated building but somehow, the camp felt it was safe enough to not condemn…yet. Hayley squinted at what she thought was toxic mold under the porch roof, then shrugged and turned her gaze over the camp lake. She contemplated what she might do today; some other campers had been excitedly talking about canoeing. That could be fun. It was nice weather for it. Hayley looked up at the cloudy sky and felt the gentle breeze on her skin. Yes, that would be a nice activity.

Suddenly, Hayley felt like she was no longer alone. She whipped her head towards the pine trees along the side of the cabin. No one was there. Again, Hayley felt the sensation of being watched and turned to her other side.

Hayley heard the crack of a branch and spun around towards the pine trees again. This time, Hayley noticed something on the ground that she had not seen before. After scanning her surroundings again to confirm that she was indeed alone, Hayley cautiously approached the dark item on the edge of the pine forest.

She realized it was a stuffed animal. A buffalo, actually. Hayley recalled that there was a particularly young camper that she had seen with such an item, perhaps this very one.

She peered into the forest. Hayley again had that feeling of being watched. The forest was shadowy, despite the morning sun rising higher in the sky. As Hayley strained her eyes to discern any shapes in the shadows, she again heard a branch crack and a faraway giggle.

She called out again, “Hello? Is there someone in there? I think I might have found your buffalo?”

Not only was there no response from any possible humans hiding in the forest but it was as if all life in the forest were holding their breathe. Hayley felt a chill down her spine. She hadn’t been paying that much attention but surely there had been birds singing and bugs chirping just a few moments ago? Something felt unnatural.

It was then that Hayley realized that she could see someone in the woods…a young girl. She was deep in the forest, too far for Hayley to make out any details, but she did seem to be looking at Hayley. Then the girl turned and began running deeper into the woods.

Hayley’s breath caught in her throat. Campers weren’t to be in the woods alone. Even if some campers had decided to bend some rules for a game of hide and go seek, it was too early in the morning for most campers to be outside of their cabin. Hayley wished she hadn’t come to the arts and crafts cabin, wished she hadn’t seen a child alone in the woods, wished she didn’t feel the need to make sure this child was safe. Hayley wished she could just go back to her cabin.

Hayley grabbed the stuffed buffalo off the ground, gritted her teeth and ran into the forest. In a few short minutes, Hayley found that the forest was too thick to let much daylight in through the tops of the pine trees.

The forest ground cover was sparse, mostly dead needles and branches. Old, thick tree trunks surrounded Hayley with little distinction in any direction. She had a sense that she had been running in a straight line and only needed to turn around to return to the safety of the campgrounds. When she turned, though, she realized that she had lost sight of the edge of the forest.

Hayley pulled out her compass. If she remembered the map of the campgrounds correctly, she would need to head north to return to her cabin. Her compass appeared broken, though, as the arrow spun in circles instead of pointing north.

Hayley frowned. She didn’t understand how the compass could be broken but instead of giving it more thought, she sighed out of frustration and shoved it back into her shorts pocket. Where had this girl gone? Hayley called out but received no response.

Just as Hayley began to think returning to the camp and alerting her counselors would be more helpful than trying to track down this child, she saw the girl again. She was deeper in the woods and staring at Hayley, once again. This time, the girl opened her mouth and let out a high, cold laugh before running into the woods again. Hayley felt her temper flare up immediately.

“This isn’t a joke! You need to get back here and go back to your cabin! We aren’t supposed to be in here, we are going to get LOST!”

As Hayley shouted that last word, she suddenly lost sight of the girl again. Hayley stopped moving and peered into the darkness where the girl had just been.

Again, Hayley felt a chill down her back as she realized that the forest had gone eerily quiet again. She turned back towards what she felt must be the way back, when she came face to face with the little girl.

Hayley yelped and stumbled backwards, falling onto the ground. Close up, Hayley noticed that the girl was indeed the young camper she had seen carrying around the stuffed buffalo. What she had never noticed before were the alarmingly green eyes, the strangely sharp teeth, the slightly pointed ears, the skinny and angular body. Something unnatural, something inhuman.

Hayley felt fear rising up in her stomach as the creature leaned over her and grinned.

“Lost?” the creature squeaked while hovering over Hayley’s cowering figure on the ground. “Lost? I am not lost. We are playing a game. Hide and seek. I was hiding. You found me,” the creature frowned before a disturbing smile spread across its face again. “And now…it’s your turn to hide.”

The creature pointed to the ground and it was only then that Hayley noticed the luna moth embroidered on the creature’s camp shirt. Only then that she noticed the ring of mushrooms surrounding her. Before Hayley could let out a hysterical scream, her stomach dropped and all went black.