The Batman at WonderCon

Home/Conventions/Events/The Batman at WonderCon
Previous Next

The Batman at WonderCon

DC Comics celebrated Batman in a big way at this year’s WonderCon, the sibling convention to San Diego International Comic-Con. With the milestone release of the 1,000th issue of Detective comics on March 27 and the 80-year anniversary of one of (if not the) most well-known characters in comics, it was a perfect time to party with the bat.

The WonderCon program guide and every single RFID badge scanner prominently featured the Bat. There were no questions as to which character was being celebrated. So of course, DC Comics had several panels to explore the impact Batman has had on creators and fans alike. The Caped Crusader was featured in a panel every single day of the show.

Scott Snyder gave fans some insight into a story he’s been mentioning at conventions for several years. Last Knight on Earth will be available at the end of May. But we now know it’s a story that begins with Bruce Wayne in Arkham Asylum. And he’s been there for 15-20 years creating the delusion of Batman based on things in the Asylum. He then breaks out and finds himself in a desert with a homemade Batman costume (comprised of glass from broken windows and the belts of Asylum guards among other things). In this desert, he finds a dusty lamp. When he blows the dust off, it is Joker’s head which comes alive and talks of speed force storms and more. It sounds like a great book and a must-read from the Black Label! Another highlight of the panel was hearing who, from the Batman Rogues Gallery, each panelist would want to take to dinner. Greg Capullo, after confirming the outing is dinner AND drinks, definitively said Catwoman. Scott Snyder mentioned he’d risk death to talk to the Joker, but also acknowledge dinner with the Riddler would be fascinating. Joelle Jones picked the Penguin, just because she’d love a nice seafood dinner.

Marking 80 years to the day since Batman made his first appearance on the pages of DETECTIVE COMICS #27 in 1939, the panel featured Lee, David Mazouz (Gotham), Kevin Conroy (Batman: The Animated Series), Lee Meriwether (Batman), Roger Craig Smith (Batman: Arkham Origins), and Grace Randolph (Beyond the Trailer). The panel brought together fans of all ages to celebrate the world’s most popular Super Hero and share a slice of Bat-cake.
Special highlights to the discussion included Conroy saying how the character is especially important to him because “Batman has no powers, but he doesn’t let tragedy overcome him.” Mazouz added “Batman turns tragedy into strength. He turns pain into something positive for everyone around him.” Meriwether also shared her heartfelt memories of working on set of the 1960s Batman film with Adam West. 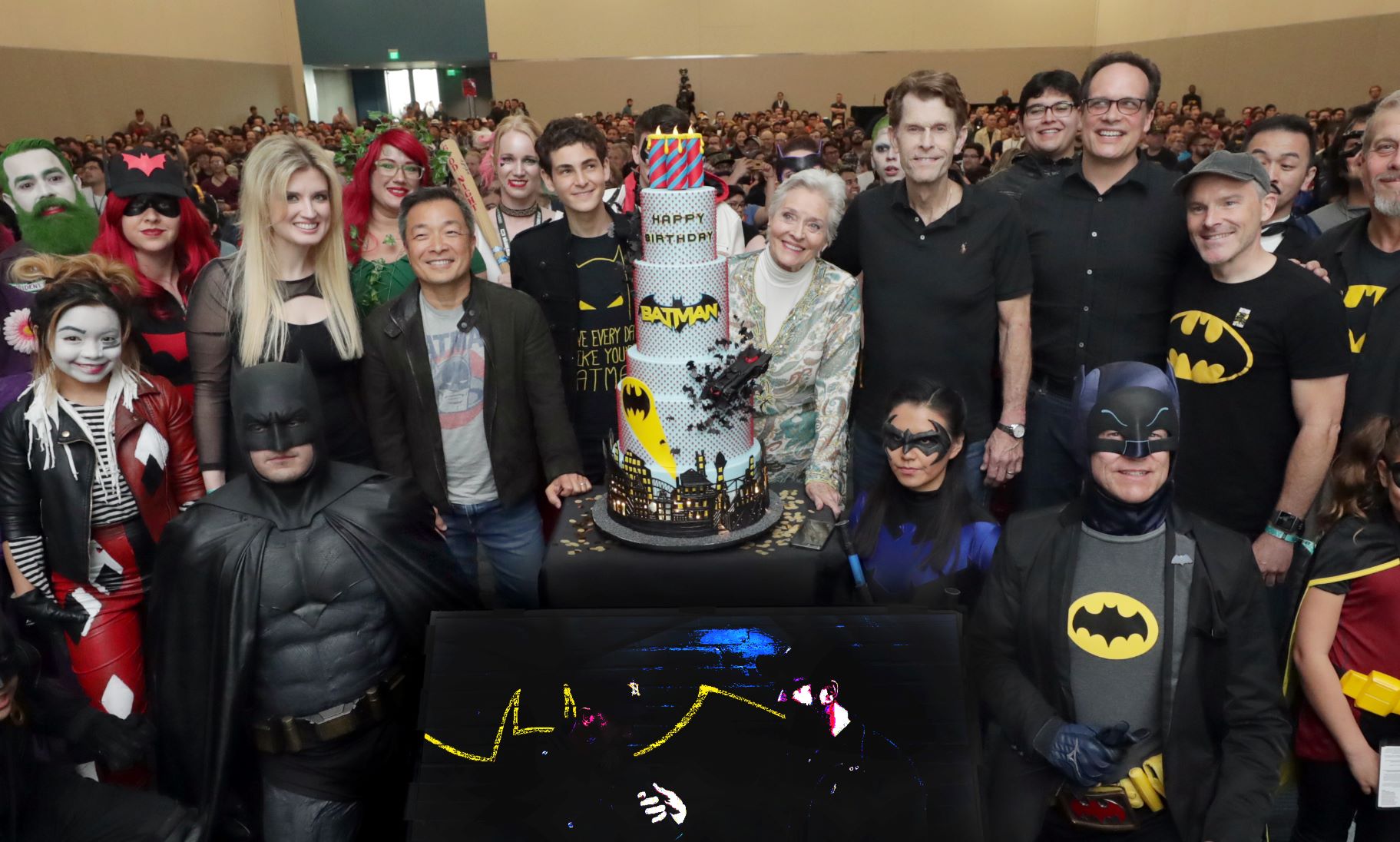 DC will honor #LongLiveTheBat throughout 2019 from now until Batman Day on September 21. Conceived by artist Bob Kane with writer Bill Finger, Batman is humanity’s timeless hero. And he’s just getting started. More details on the global celebration will be released in the coming months.
Fans can join in on social media using the hashtag #Batman80 and #LongLiveTheBat. Visit www.Batman80.com for the latest news and updates.
About DC
Home to iconic brands DC (Superman, Batman, Green Lantern, Wonder Woman, The Flash, etc.), DC Vertigo (Sandman, Fables, etc.) and MAD, DC is the creative division charged with strategically integrating across Warner Bros. and WarnerMedia. DC works in concert with many key Warner Bros. divisions to unleash its stories and characters across all media, including but not limited to film, television, consumer products, home entertainment, and interactive games. Publishing thousands of comic books, graphic novels and magazines each year, DC is one of the largest English-language publishers of comics in the world.