Hogwarts Hungries: Potter-inspired treats you can make at home!

Hogwarts Hungries: Potter-inspired treats you can make at home!

Halloween is upon us, Iggles! If you’re a Potterhead like me this time of year isn’t just about the pumpkin (though I’m pretty much stuffing my face with every pumpkin thing I can get my hands on right now.. pumpkin pancakes, anyone?), but also about the butterbeer and the cauldron cakes and , yes, even the cockroach clusters. Even if you’re not a huge Harry Potter fan, but simply an appreciator of treats over tricks, I’ve pulled together some fun recipes and ideas for adding some magic to your Halloween menu.

I’m working in English standard, but here’s a great link to converting the measurements to metric, as needed! 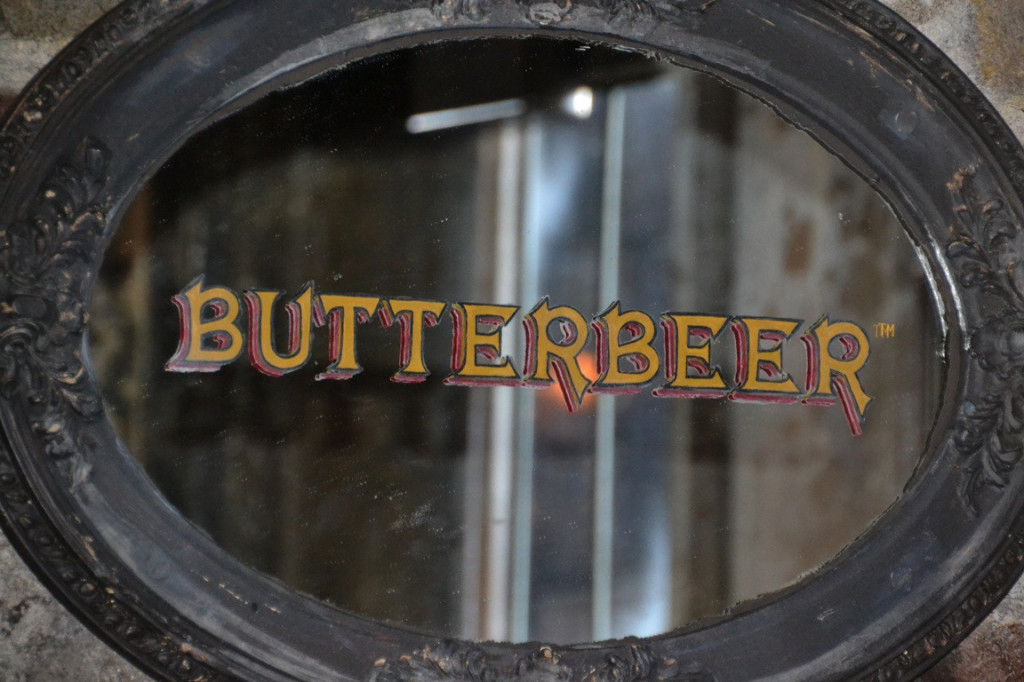 Warm Butterbeer
Perhaps the most famous Harry Potter-related food isn’t a food at all– it’s a drink! In the books, butterbeer is made at the Three Broomsticks in Hogsmeade and is described by Harry as “the most delicious thing he ever tasted” that “warmed him from the inside.” Here are three options for making your own butterbeer right at home!

Recipe:
For the “beer” you need:

For the topping you need:

Step 1: Warm the soda in a saucepan (for a large batch) or microwave a single serving in an appropriate mug. Once steaming, gently stir in the schnappes/cordial (and the rum, if using). This is the base for your drink.
Your ratios depend on the number of servings you are making, but a good guideline is about 2 oz of schnappes per 1 cup  of soda.

Step 2: Put your Fluff into a mixing bowl and whisk it until it is smooth. Add the cream and keep mixing until they are combined. Finally fold the vanilla into your mixture. You should have a smooth, creamy bowl of goodness. Spoon 2 T of the mixture onto your drink and enjoy!
This topping makes a fair amount, so for a single serving only use a couple of tablespoons of marshmallow to begin, and reduce the other ingredients accordingly. It’s all to taste, really.

Pro tips: A little goes a long way! Too much topping and it will overflow, as happened to me the first time I made this recipe. Also straws and stirring the drink are a no-no, as both will cause the topping to rapidly expand, again leading to overflow. For best results, sip slowly through the marshmallow to enjoy the drink.

Alternative method: If you don’t want to make a topping, adding a little sweetened condensed milk will give you the flavor, just without the aesthetics.

If you want to see the first time I made this using Flying Cauldron Butterscotch Beer as my base, along with more tips and tricks, here’s the link! 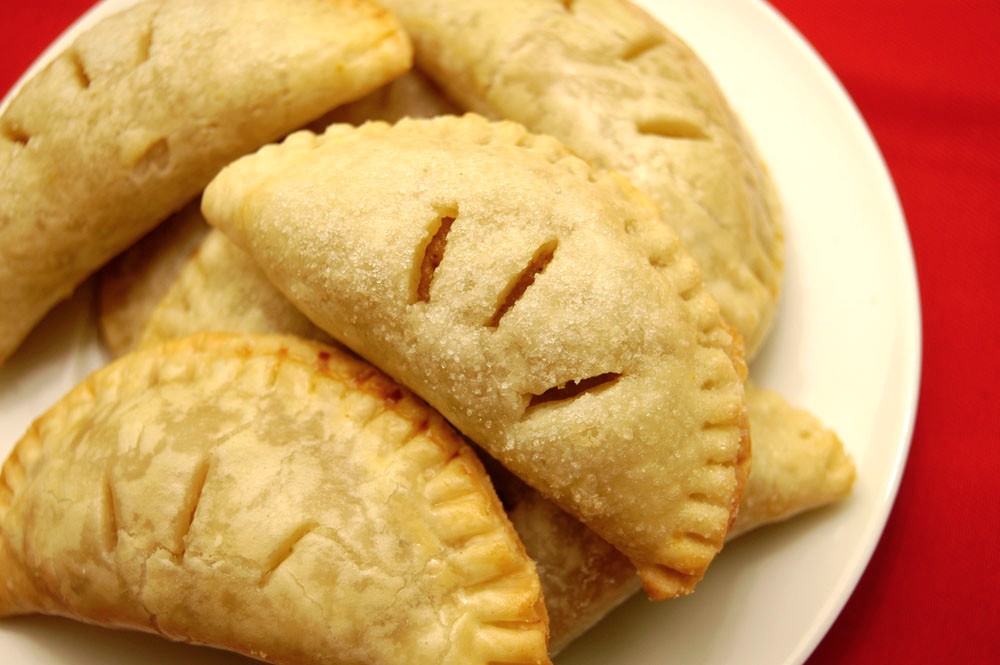 Pumpkin Pasties
Traditional pasties are usually made with meat filling inside a pastry shell. Pumpkin pasties, though, are one of the first treats Harry purchases on the trolly aboard the Hogwarts Express. It’s a good substitute for any kind of packed lunch made out of the sandwich your mother forgot you don’t like, and generally sounds like the perfect handheld snack.

Step 1: In a large saucepan, combine pumpkin, sugar, and spices. Bring the mixture to a boil, stirring constantly. Reduce the heat and let it simmer, stirring often, for an hour or until thickened. Finally, remove then cinnamon stick and allow the mixture to cool.

Step 2: Roll or flatten the pie pastry to 1/2 inch thickness on a lightly floured surface. Then cut into 4 inch diameter circles. (Alternatively, you can roll pastry into 1 1/2 inch balls, then flatten into circles of the right thickness.)

Step 3: Place a spoonful (about 3 T) of the pumpkin mixture onto the center of each circle and fold the pastry in half. Moisten the edges with water and press with a fork to seal, then place them on ungreased baking sheets.

Step 4: Bake at 400*F for 18 to 20 minutes, or until the edges are golden brown. (Optional: you can brush the pastry with egg to give it a more golden, shiny crust.) Serve warm or cold (but I like them warm)! Cockroach Clusters
Cockroach clusters are one of Albus Dumbledore’s favorite treats, and while this recipe doesn’t have the real insects in them, I have to agree it’s pretty tasty, and very easy to do.

Step 1: Line baking sheets/trays with parchment paper (or wax paper if you don’t have parchment, but I find parchment to work the best).

Step 2: Microwave the morsels in a larve bowl on medium high for 1 minute, then stir. Continue microwaving in 10-20 second intervals until smooth, stirring each time. Once they are fully melted, stir in peanut butter and mix until smooth and well-blended.

Step 3: Fold in chow mein noodles (and coconut and marshmallows, if using). Toss the mixture until coated. Using a spoon, drop spoonfuls onto the parchment paper and chill until hardened.

Texture tricks: This is similar to a standard butterscotch haystack recipe, but the coconut and marshmallows provide the texture that will make your party guests think of the legs, etc, of the cockroach. Mmmm, yummy. ~_^ You can also substitute any other nut butter as needed for allergies, or use chocolate instead of any nut butter at all. 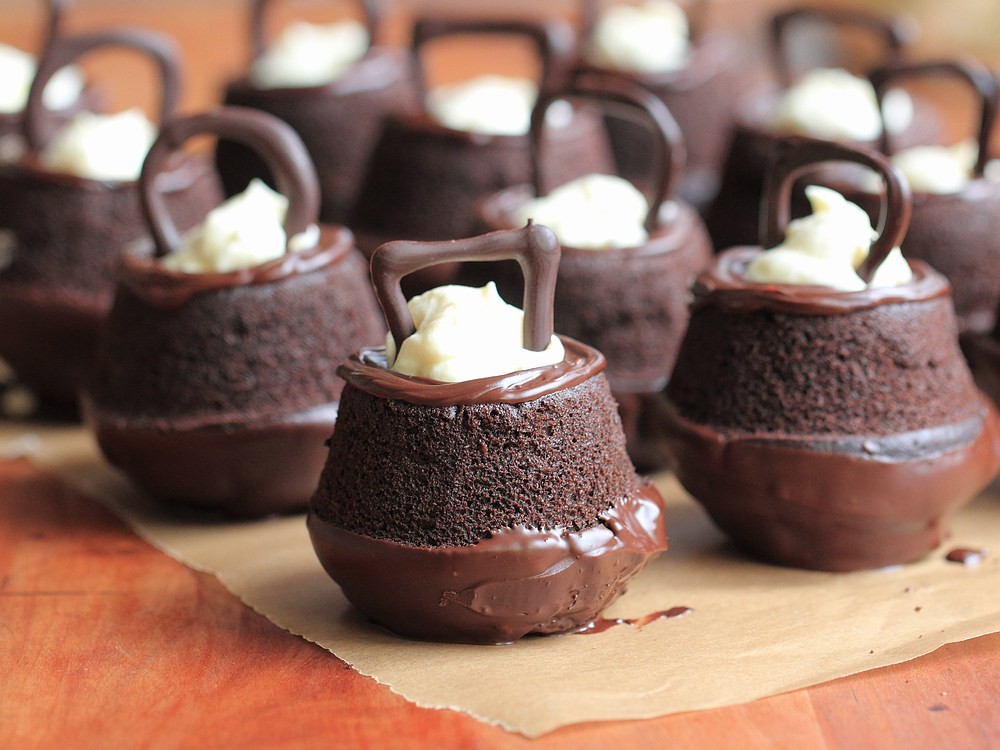 Cauldron Cakes
Cauldron cakes aren’t ever fully described in the books, but in my mind I can’t help but think of the molten chocolate lava cakes you find sprinkled with powdered sugar. Dark chocolate cake to be the cauldron with the melted gooey goodness to be the sweet potion in the center? Yes please.

Step 1: Grease a muffin tin (or custard cups) with butter. This recipe usually makes 10 cakes, so plan on your dozen tray having two empty spaces. Sprinkle evenly with cocoa, and shake out the excess. Put the muffin tin in the refrigerator to let the butter and cocoa firm.

Step 3: Spoon the mixture evenly into the chilled muffin tins. (Again this should make 10.) Bake them at 425*F for 10 minutes, or until the edges easily separate from the tin but the centers are still soft. Remove from the oven and let stand for 1 minute. Then invert them onto a plate and serve warm.

Garnishing touches: Sprinkle your cakes with powdered sugar or even colored sanding sugar to add a little “magic” to the plate. Pieces of licorice make great “handles” for your cauldrons as well, and you can drop berries or even frosting (I like mine with cream cheese!) in the concave space that will form on top of the cake. So good.

Other recipes you could try:
If you’re still wanting more Harry Potter treats, here are a few other recipes I’ve found that look like they’ll suit the bill!

Pumpkin juice: A standard at the Halloween feast, and pretty much most of the year. Probably not what’s in Mad-Eye Moody’s flask.
Pumpkin tart: Though I’m guessing a pumpkin pie with a cinnamon graham cracker crust would also do the trick on this treat.
Treacle Tart: Personally I’d take maple fudge candy, but that’s just me.
Rock cakes: Maybe make your own instead of taking one from Hagrid, especially if you’re a fan of keeping your teeth.
Peppermint humbugs: Present at Harry’s very first start-of-term feast, and I’m guessing they were there for Dumbledore’s sweet tooth.

Got any Harry Potter-inspired recipes I haven’t mentioned? Share some links or ideas in the comments below! ^_^

Unlock the achievement with the code magictreats