Get Your Dice Ready! [Monopoly]

Get Your Dice Ready! [Monopoly]

As a child, one of the first board games I was introduced to was Monopoly. There was always a fight between who would get which game piece, except for me. No one ever wanted the thimble and I would never pick any other token. Poor thimble, I resemble it’s shape with a Dalek so perhaps it was a sign that I would one day become a Doctor Who fan.

Anywho, as much as I would like to discuss Doctor Who all day with everyone, let’s stick with discussing Monopoly. It’s one of those classic games that most of us learn at an early age. To this very day, I’m still not quite sure why Monopoly was dubbed as a game to play with children. Most of my friends lack the patience to sit through an entire Monopoly game, seeing as the game could take at least 3-4 hour

Somewhere along the lines, I became a collector of board games. Pokemon: Master Trainer, anyone? Although, I have what I find to be a random passion for collecting Monopoly editions. I am certain that it began when I received the Lord of The Rings Monopoly edition one year for Christmas. I had a fascination of collecting the different tokens, and this fascination has grown into a large collection. I frequently browse Amazon for new editions that may pop up to add to my collection that currently holds 20+ editions of Monopoly. Today, I wanted to share with you all some of my favorites that I’ve come across which I believe you may enjoy as well. I encourage you to order one of these editions to bring to your next game night for a classic night, hilarity will ensue, especially if you have a friend who HAS to have the equivalent Boardwalk and Park Place.

Nintendo Monopoly — If you decide to indulge in this one, be sure to try and find the 2006 edition. The deeds showcase more of the original Nintendo characters such as Falco and Metroid. Plus, one of the tokens is a NES controller. Marvel Comics Monopoly — If you aren’t already sold on this version, then you may want to know these two tidbits:

1. In order to win, you must own the majority of the comic book covers, as opposed to greatest assets in total.

2. One of the tokens is an Infinity Gauntlet, or, you always can use Captain America’s shield. 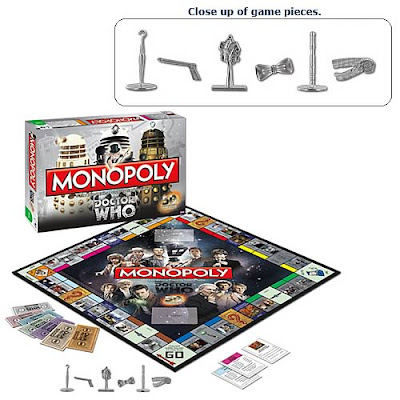 Doctor Who 50th Anniversary Monopoly — Well, this should one be self-explanatory seeing as I had earlier mentioned Doctor Who and think of the thimble in original Monopoly as a dalek. Hey, you could always use that piece to add a 7th player if need be. The deeds are a perfectly balanced mixture between older and newer episodes.

Adventure Time Monopoly — I’m going to admit to you all that I am not a fan of Adventure Time. However, when I saw this, I had specific thoughts of at least ten Iggles who may want to add this to their collection. Thinkgeek’s description of “embarking to the sweet and sugary Candy Kingdom” really makes me want to buy this game and force myself into the show, though..

That’s it for this month, loves! I hope you enjoyed my first blog post. Feel free to comment on anything that you wish and please suggest games that you would like to see me play and review.

About the Author: Advent Geek Girl

Sarah Bonilla (Advent Geek Girl) now lives in a small town in Mideastern Wisconsin, but used to also live in North Carolina and Scotland. She is a sixth grade literacy teacher and runs a youth Tabletop Club. AGG is a mother, wife, foodie, and travel-enthusiast in addition to her primary geek addiction as a tabletop gamer. She geeks out over nuns, zombies, and all things sci-fi. She holds a Masters and partial PhD in Film Studies and used to be heavily entrenched in the film festival circuit as a critic and youth film festival curriculum developer. Sarah hails from House Organa and is a child of the 80s. Over the last several years, AGG took on the task of immersing herself in her previously suppressed love of all things geek, thus her handle. Find more about Sarah and her geek rising on her social media accounts or her blog at http://adventgeekgirl.blogspot.com.