My name is Gwen and I am the blogger/head geek in charger over at A Geek And Her Oven! It’s basically my fortress of solitude where I post about all the things I love about nerd and geek culture while throwing in baking (which is actually my business)!

Every Friday I have Foodie Friday where I bake something inspired by a fandom using easy store bought materials OR share a recipe I stumbled upon via pinterest or another favorite site of mine!

So lets get to the reason you’re here…cookies..cookie donuts? donut cookies?

Everyone who watches the Simpsons knows of Homer’s favorite donut…you know the one..the one with pink frosting and rainbow sprinkles. Well, here’s the thing: I SUCK at making donuts. I have tried. I failed.
So I went with the next best thing which was making a cookie that looked like a donut.
PROBLEM SOLVED! 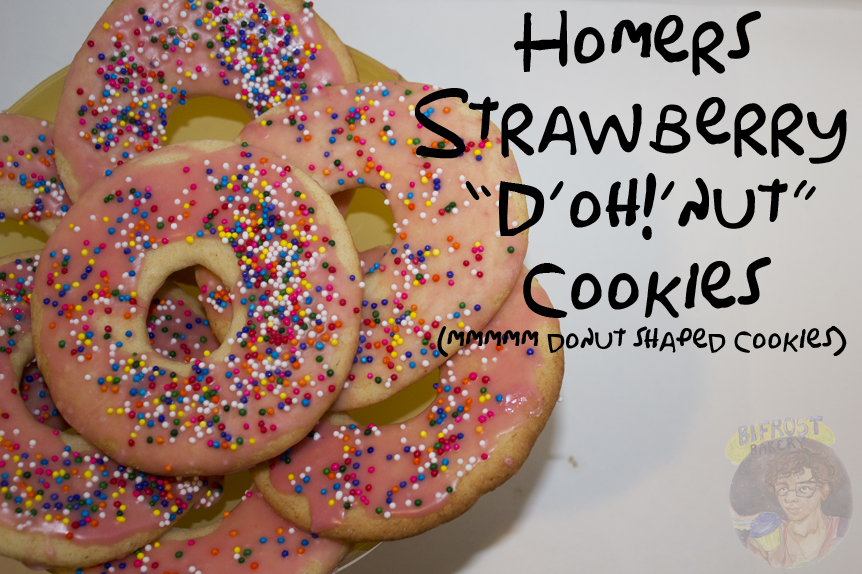 The only difference between the way mine look and his is that I didn’t have the longer shaped sprinkles at the time. But you can go out and buy them to make them look more accurate if you want! 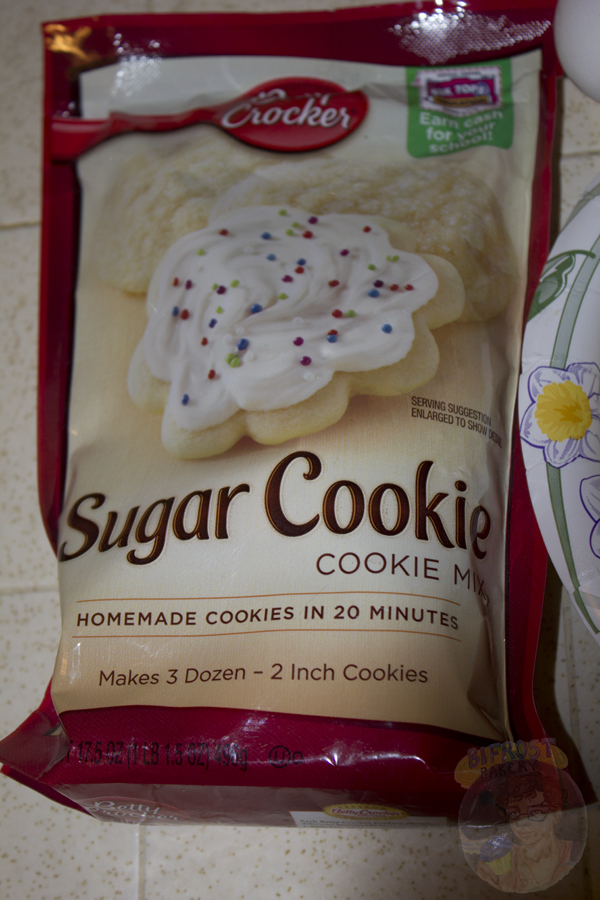 This is the sugar cookie mix I am using for this recipe. It’s easy to find and usually on sale (2 for $5 if you catch them on a good day). If you flip it over you’ll find two options on how to prep this and for this recipe you’re going to use the second one, the one for cut out cookies. 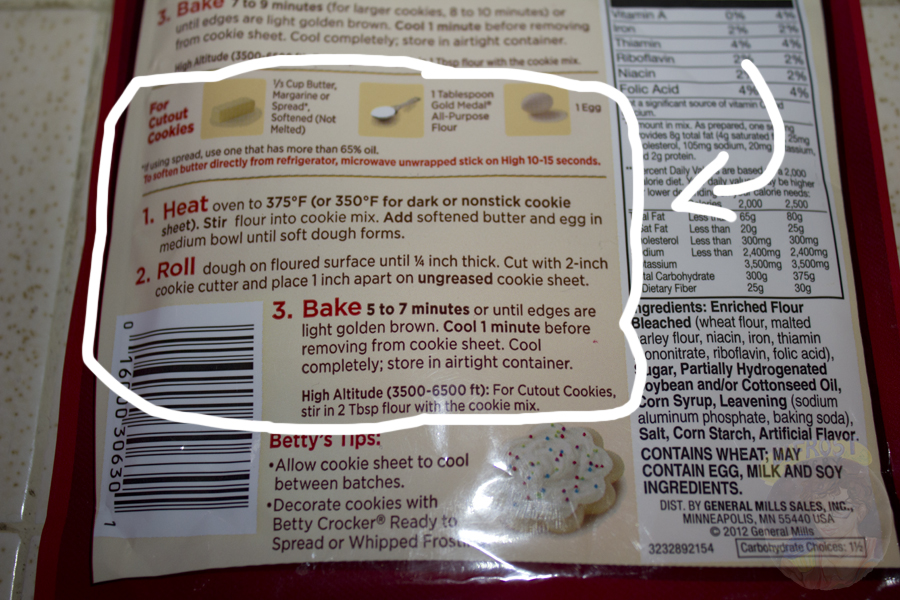 Just follow the directions for that recipe but instead of cutting out the shapes right away it’s best to pop the dough in the fridge for a bit. I did mine for 30-40 minutes in a plastic food storage bag. 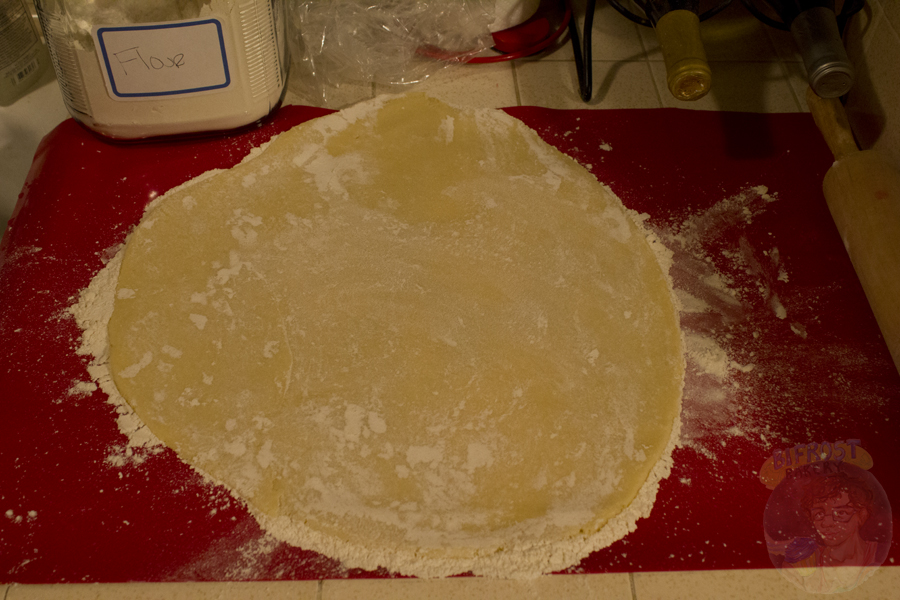 Once out of the fridge you’re going to want to flour your counter as well as the dough and the rolling pin to roll it out at an even thickness. How thick they are depends on your preference. Same goes for how big you want them to be. So from this point on for the most part everything is up to preference. 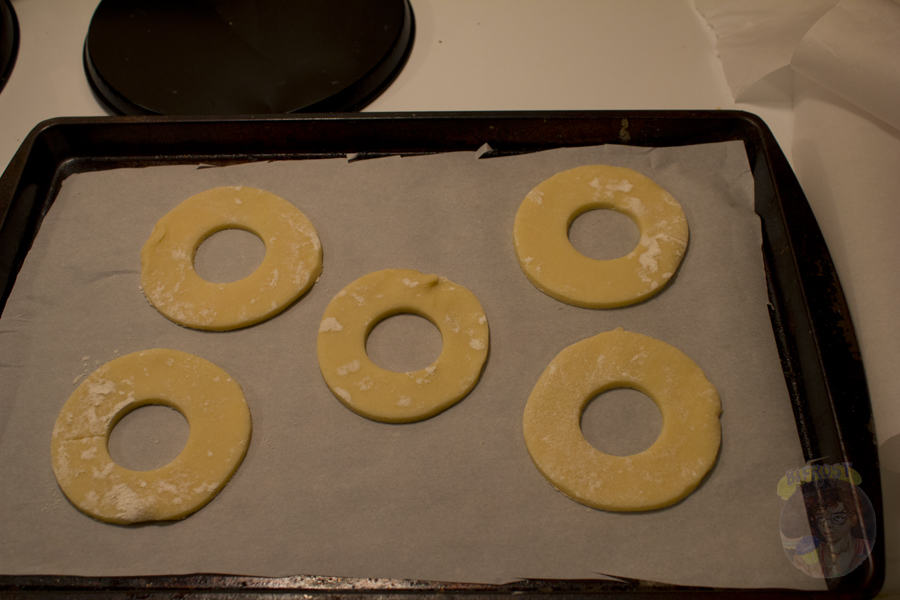 The bake time on these is 5-7 minutes. But at most I put them in for 8 and they turned out nicely. I like my cookies to be a little soft but still have some color. 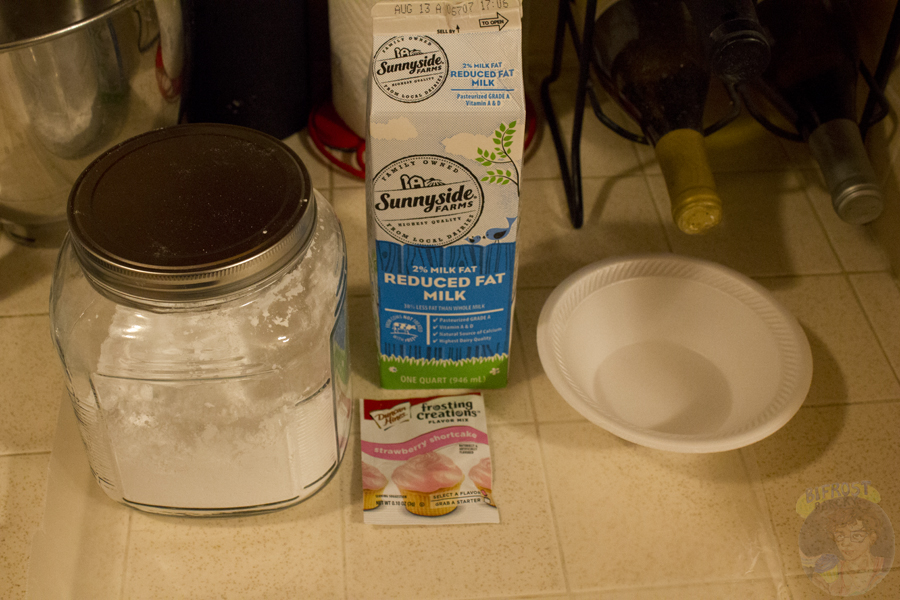 This is what you need for the glaze/”frosting” which is just powdered sugar, milk and a packet of Strawberry Shortcake Frosting Creations (which is a powder flavor that you put in plain frosting to put on cupcakes). In the bowl, I put in about 1/3 cup of milk, the Strawberry Shortcake Frosting Creations flavor pack and mixed it in until dissolved. After that, I added the powdered sugar. This part also depends on preference. You just keep adding about a tablespoon at a time until its at a thickness you like. I used about 10-12 tablespoons until I got the desired thickness for my glaze.

An alternative to this would be to make a batch of royal icing and add the flavor packet to it. This would make it a more cartoony and more defined look. If you don’t know what royal icing topped cookies look like, check out one of my favorite cookie makers Mike! He also has his go to recipe for royal icing on his website. 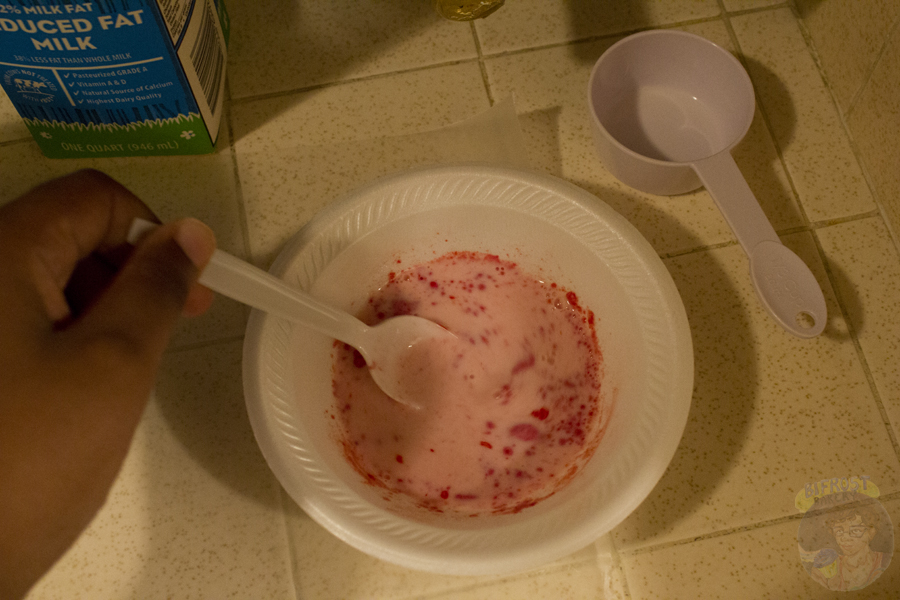 (this is NOT what you want your glaze to look like. I ended up using a whisk to mix since the spoon wasn’t working out) 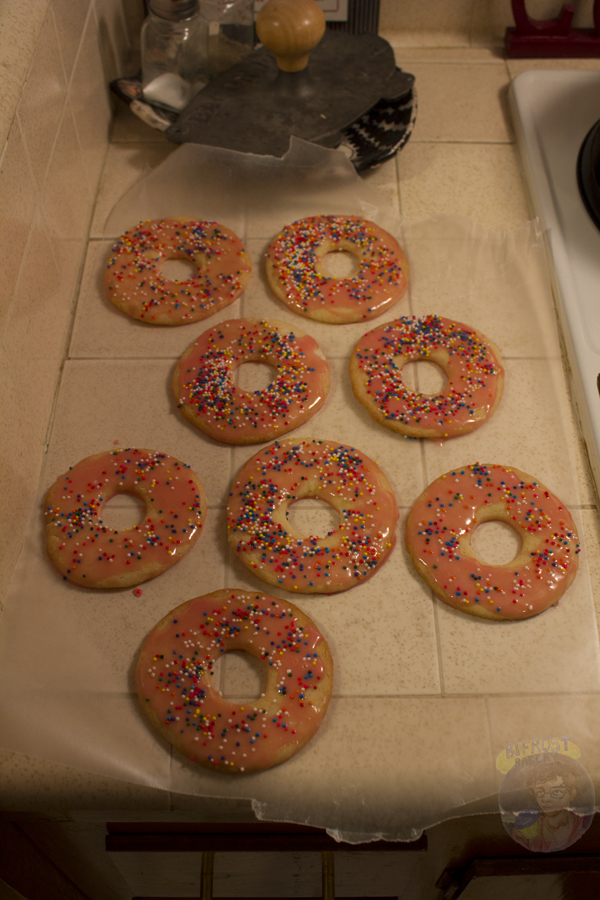 Once your glaze is done, you just spoon it onto the cookies creating a glazed donut effect. You can also dip the tops in if you want a cleaner look but I like the drizzled look and how it spills over the sides.
Pro Tip: After glazing, move the cookies to a completely new sheet of wax/parchment paper. Because you’ll find that when glazing, the extra will puddle around the outside and in the inside hole part and if left there will first make the cookie bottoms REALLY soggy and second most likely will harden and they wont look like donuts!
Before the glaze starts to dry you top with sprinkles. I only had these handy but I know the donut on the Simpsons has the longer shaped sprinkles.
I would suggest letting them dry for a full 24 hours before serving BUT for the sake of getting a photo I waited about an hour or so, took the photo and then put them back on the wax paper. 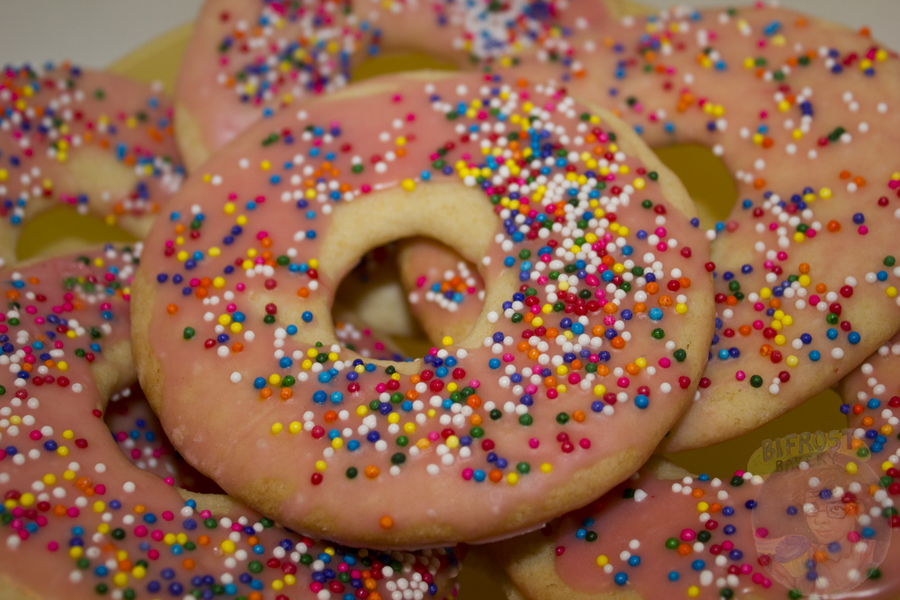 And there you go!
Your strawberry cookie donuts are done!

The flavor of the icing packet is phenomenal. I think the idea of these is great if you’re in a bind and need a quick flavor and don’t wanna spent a lot of money on flavor oils and things like that.

I will most definitely be using these again in a future Fandom Food recipe post!
Until next month IGGLES!
Live Long And Prosper,
Gwen

A 20-something geek living the Bay Area who is a book seller by day and a blogger/creator by night. Hobbies include but are not limited to: sewing up geek fashions, toy collecting, reading comics and graphic novels and of course books, drinking wine and obsessing over cartoons and Wes Anderson. This is my design.