Home/Books, Reviews/Book Review: The Girls of Atomic City
Previous Next 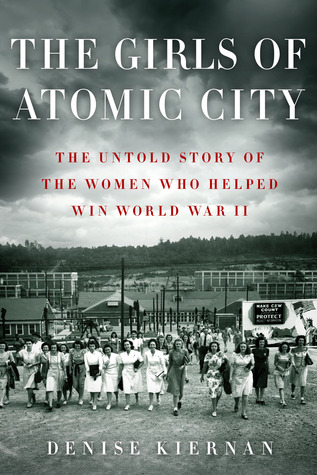 So, funny story: I finished this book back in January, but didn’t want to post about it at the time because I had already written a book review for The Devil in the White City (and the titles of both books are really similar). Initially, I was going to hold off on this post until the summer, because this actually would be a total beach-read for me, but it’s Women’s History Month, and I couldn’t get my hands on something by bell hooks or Chimamanda Adichie Ngozi like I had wanted, so I figured that now is as good a time as any to tell you about The Girls of Atomic City: The Untold Story of the Women Who Helped Win World War II by Denise Kiernan.

Surprisingly, American history has done a fairly good job of pointing out that when the men went away to war in Europe, the women back home did an A+ job of stepping up to work on the home front to assist the war effort. This includes the women from across the United States who went to work in Oak Ridge, Tennessee—better known now as Atomic City, where they enriched the uranium for the A-bomb. Bizarrely enough, Oak Ridge, Tennessee didn’t exist on maps during or after the war, and the people who worked there didn’t know what they were working on until the bomb “Little Boy” was dropped on Hiroshima.

Kiernan interviewed many women who lived and worked in Oak Ridge (and stayed there after the war ended). As readers, we view not only the work women did at the Manhattan Project’s plants, but also their daily struggles. One African-American worker has to live in a small hut with three other women and is separated from her husband because Black employees aren’t allowed to cohabitate. Several local girls have to deal with the pain of seeing the government evict their families and neighbors from their land to build this new town. Another is asked to spy on the people around her because loose lips sink ships. And makeup is scarce due to rationing.

Interwoven throughout the narrative is the development of the bombs as well as the story of the woman who first proposed the idea of nuclear fusion. It shares in gritty detail the story of a man who is injected with radioactive isotopes after a car accident, but most of all it focuses on the lives of women who helped win the war.

I liked this book very much. In many ways, it is similarly structured to The Devil in the White City and it reads like a work of historical fiction rather than nonfiction. Another reviewer on Goodreads claimed that it starts like a spy novel, and I don’t think that’s incorrect. For a book that does talk about stuff like physics and nuclear fusion, it’s easy to follow along. I have a tendency to be more interested in learning about the domestic life of nonfiction subjects, but I wasn’t put off at all by the scientific elements Kiernan discusses. I recommend you either get your hands on a copy ASAP or you wait until summertime, because like I said, it would be a fantastic beach read.

For more fun in this time period, I recommend you watch the Canadian TV series Bomb Girls on Netflix. I also created this collection of articles on Flipboard with pieces discussing Oak Ridge, the A-bomb, and the girls of Atomic City.