Book Review: A Place of My Own

Home/Books, Reviews/Book Review: A Place of My Own
Previous Next

Book Review: A Place of My Own 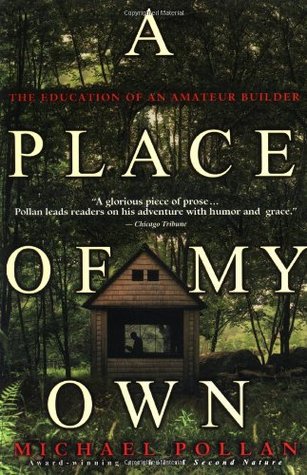 You may know Michael Pollan’s name already. He’s that guy who wrote The Omnivore’s Dilemma and a whole slew of other works, none of which I have read, not for a lack of interest in food and personal politics, but rather just because every time I’ve had one of his books in my hand with another book, the other book won.

A Place of My Own is not Pollan’s best-known work, but I read it all the same, mostly because the title resonated with me at this particular time of my life.  Of course, being that the subtitle of the book is The Architecture of Daydreams (on my copy, anyway… on Goodreads the subtitle is as pictured), I understood that the book was not about the desire for an independent life.

The story goes like this: One time, Michael Pollan built a little house in the woods. In a way, he got two fruits for his labors, because he did get a nice little writing studio and a book out of it. He discusses the process of decision-making, the design of his building, and of course, the actual building phase of it. In the preface he wrote after the book’s 10-year anniversary, Pollan writes that he is perplexed by the various people through the years who have treated his work like a sort of builder’s manual.

It’s not a builder’s manual.

While this wouldn’t be the first book I pulled off my shelf in the event that I decided to build a house, A Place of My Own does speak for itself. It reads like the best parts of Walden (if Walden is your thing), which may be intentional because Pollan appears fond of Henry David Thoreau. There is a lot of contemplation about space and its relation to the individual, as well as a lot of thought about what the little house could be, what Pollan saw it being the more it took shape. And of course, the discourse about building frames and stuff.

Overall, this was a fascinating read for me. Even in the realm of nonfiction, I tend to gravitate toward things like biographies and memoirs, or specific events (like the 1893 World’s Fair or the Scopes Monkey Trials), so this was a little out of the norm for me. It also was good to show that nonfiction can be about anything. In a few years, I might give this one a reread to see if my personal interpretation of it has changed at all.