Hello again lovely iggles, and welcome to another blog post from your House Prefects!

We are excited about this month’s theme – Animation Celebration – and wanted to share a few of our favorite animations with you! We would love to hear about your favorites, too. Tweet at us: @HouseGranger @HouseGlaDOS @HouseQuinn_ @HouseOrgana or comment below! 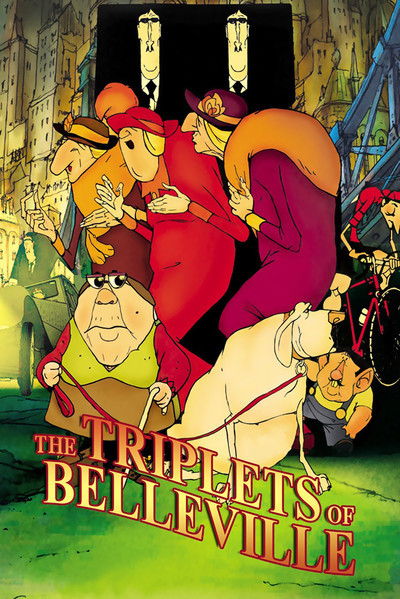 The Triplets of Belleville

I have chosen The Triplets of Belleville. It’s an animation about an elderly lady who goes on a quest to rescue her grandson, a Tour de France cyclist. She is accompanied by the grandson’s dog, Bruno, and the Triplets, music hall singers from the 1930’s. It is a brilliant and hilarious film and I chose it because the animation style is different from anything else I’ve ever seen. Probably one of the animated movies with the most impact in my life is Hayao Miazaki’s/Studio Ghibli’s Kiki’s Delivery Service. It was the first SG film I ever saw, and I received it as a Christmas gift when I was 8 years old, when we were hosting a big Christmas party and my grandmother was dressed up as Santa. I watched it over and over and loved it, and even to this day it’s one of my favorite SG films. My grandmother passed away a few years ago, so my connection to Kiki’s Delivery Service goes beyond just how much I love the film; it also makes me think of and remember my grandmother. I recently bought myself a Jiji mug like the one from the movie, as well as a shirt and sweater from the movie, all of which I picked up at Hot Topic.

Always believe in yourself!

I fell in love with the Baron the moment I first saw The Cat Returns. I don’t even know what intrigued me, ’cause I don’t even like cats – he is the only exception! Whether it be the calming tone of his voice, or the way he makes tea that ‘tastes a little different every time’. (Thank you so much Cecilia for your gift of the Baron’s Special Blend Tea!) The Baron always has a way of calming me 🙂

Plus, who wouldn’t want to turn into a cat for a day and go to the bureau!? :3

My favorite cartoon/animation would be Archer. It’s my favorite because H. Jon Benjamin (Bob’s Burgers) is the voice of Archer. Plus there are other awesome actors like Aisha Tyler, Chris Parnell, Judy Greer, and Jessica Walters. I love it because it brings comedy into the spy world and makes spies seem more normal than they are believed to be. It is also funny, because Archer is obsessed with phrasing, Kenny Loggins, and “Danger Zone” from Top Gun. My favorite character from Archer would be Pam, because she is actually a secret bad-ass. She loves drag racing against the Yakuza and messing around with Ms. Archer (Jessica Walters). I think this is a good animated series because they show that spies are normal and can mess things up too, considering everything they plan never usually works. I would suggest that you be at least 15 years old or older to watch it, because it is rated TV-MA (Mature Audience). So you should check out, Archer and get into the DANNNGGGERR ZONE!

One of my favorite cartoons from my childhood is Disney’s Adventures of the Gummi Bears. It was the perfect cartoon for an Iggle-to-be! Number One: It had a great, catchy theme song that still to this day gets stuck in my head… (Gummi Bears – Bouncing here and there and everywhere…) Number Two: It was a wealth of magic and mystery and fairytale! Princesses and castles, Gummi Berry Juice, the legend of the Ancient Gummi Bears – So many things to love! Number Three: It had the best lovable little characters – Even grumpy old Gruffi made you want to hug him! Number Four: I loved Sunni Gummi’s little green outfit – I would totally rock that cosplay look!

It was tough for me to choose just one. I love cartoons! I decided to go with “A Pup Named Scooby Doo” because, to this day, the episodes tend to crack me up. I love the over-the-top exaggeration of the character’s personalities, and I also enjoy the simple “whodunnit” atmosphere of each episode. The show is rife with tropes that are still relevant enough to entertain kids today. I think I may just go watch an episode or two now!

What are some of your favorite animations? Let us know!

Be sure to follow your House Twitter to keep up with events and goings-on within your House! Also, check out your House forums! Haven’t been sorted yet? You can do that here.